Yesterday we headed down to Porte de Versailles to attend the Salon de l’Agriculture. The show, the focus of which is, surprise, agriculture, wound up being much like Houston Livestock Show and Rodeo without all of the sucky bits (like the rodeo and the carnival).

Sheer number of people aside (Paris fire marshal: what the hell, man?), we had a good time, though we didn’t buy nearly as much fresh food (oh the veggies, eggs, honey, cheese, and wine) due to the aforementioned throngs of people. We’d undoubtedly do it again (as a matter of fact, the Purrito is back at the show right now, as the host of a meetup group [yes, I bowed out]).

Filouse, the belle of the salon. (No, seriously; she’s the official mascot of this year’s salon.)

A prize-winning, if shy, cow.

Charolaise cows. Their apparent sizes aren’t due to a trick of the lens; these cows weigh on the order of 1700 kilos each.

Close-up of a charolaise. Kid for scale.

A relative of Fezzik, in sheep form.

A barbie girl in a barbie world. Life in plastic, it’s fantastic.

It took six guys to keep these massive horses (barely) under control.

A very German game at a very French event. 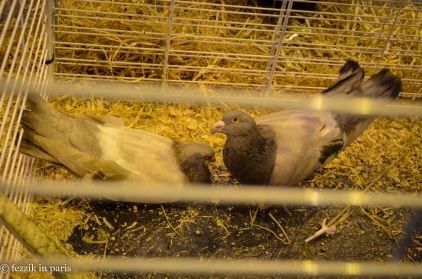 The scale isn’t apparent, but these pigeons (Romain) are chicken-sized and weigh on the order of a kilogram each. 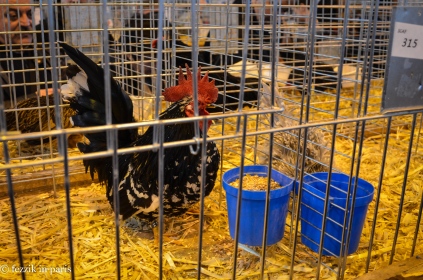 A very proud rooster, shortly after crowing at me.

Emo cows from the Scottish highlands. 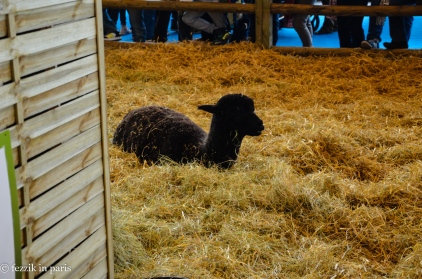 Half of an Aurora (the non-wild half).

The tram outside of Porte de Versailles.

The massive hunk of bread that cost us a whopping 4 EUR. Unexpected bonus: it’s sourdough.