As proof of said stupidity, I present a photographic record or our trip to the catacombs on what turned out to be a very rainy Friday (last Friday, for the record; I’ve been sick and busy).

Doubting our decision not to go to Greece, at approximately mid-day Thursday, we decided that since I was going to be home on Friday, we’d pre-book tickets for the catacombs via the internet (something which is absolutely, unequivocally necessary, unless one enjoys standing in line for upwards of two hours) and head out, because, hey, maybe neither of us were feeling that bad (the Purrito had the start of what we assume to be my cold at this point).

Yeah. We made it to the entrance, we made it through the 1.5km of tunnels that lead to the catacombs, we made it through the catacombs and even through the wet tunnel towards the exit. We faltered somewhat at the steep spiral staircase leading back to the surface (85 or 90-odd steps up, if memory serves), dragged ourselves across the street to the officially-unaffiliated-but-very-well-located comptoir des catacombes junk shop across the street (I’m always in need of more handkerchiefs, and this one has skulls), hiked back to the métro stop from whence we came (one gets dumped out a fair distance away from where one enters), and poured ourselves into the métro home.

While les catacombes were something that both of us wanted to see, I don’t think either of us know if we actually liked them or not; yes, they’re massive swathes of bones located in old limestone quarry tunnels, with surprisingly theatrical (and often tasteless) plaques about The Dead scattered here and there, but there feels like there’s something “off” about the experience, like something is amiss. The experience is hollow somehow, and I’m at a loss as to explain why. I’ve actually found the messy history of left-bank limestone quarrying much more interesting, though I’ll admit as well to being interested in the somewhat ghoulish history of the cimetière des innocents and the confluence of events that led to the mines being adapted for use as a mass burial site (hey, we’re seeing alarming subsidence due to old, and in many cases, unmapped and illegal limestone mines. We should figure out where those things are. Now that we know where they are, we do have an awful lot of cemeteries with an awful lot of bodies, and oops, that one in the middle of town directly adjacent to the market just collapsed into the basement of one of the buildings next to it…)

In any case, now we know. 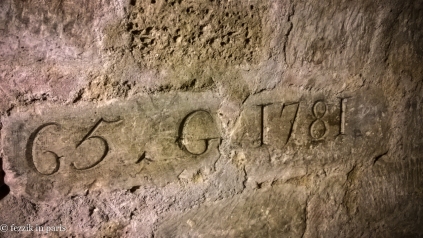 These tunnels were mapped a while ago.

On the long path to the actual ossuary. 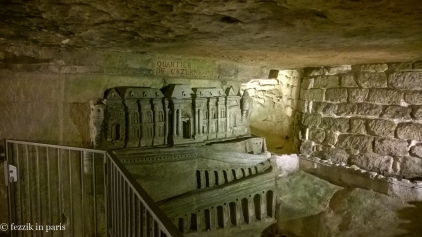 A model carved by one of the mine inspectors.

Arguably the best picture of the day.

Yeah, this is a bit tacky.

Cimetières from whence the bones came. 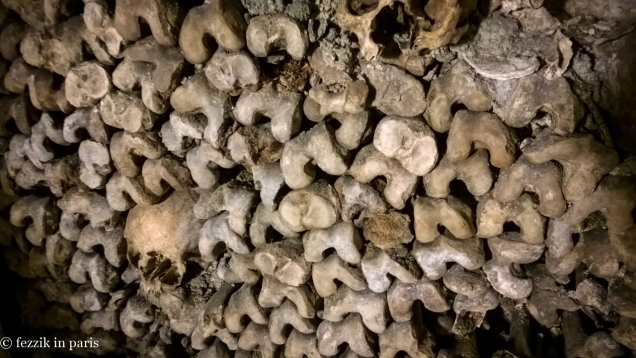 It seems like that first layer was carefully stacked while the bones behind were just tossed in there.

It’s a touch wet in places. 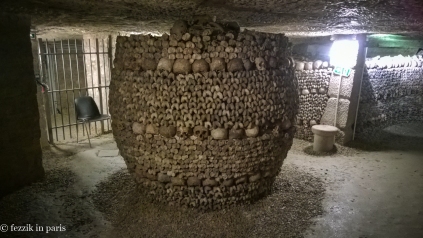