While we had originally planned an expedition to the Musée des arts forains, I found, while double-checking the website, that while the museum normally had a reservation-free, just-show-up period between Christmas and the new year (throughout most of the year, it’s Monday or Tuesday only, reservations required, subject to sufficient interest…), and while the site had said, a mere week before, that no reservations were required, suddenly, “due to the security situation,” one had to book tickets for specific time slots online.

Needless to say, all of the tickets were sold out.

As we’ve been meaning to go back to Musée d’Orsay, our plan was to head there, wander around for a while, jump up to Île de la cité to buy cat food, head to an umbrella store in which the Purrito had taken an interest, and head back. This modified plan promptly fell apart as we reached Orsay and realized that a) we’re stupid (or at least forgetful) because b) it’s Monday and c) Orsay is among the museums closed on Mondays.

The newly-modified plan for Monday now revolved entirely around Île de la cité; we’d hit Saint-Chappelle, duck into Nôtre-dame de Paris, buy cat food (BHV is just across the river), and pop into an umbrella store. Oh, and grab something to eat at the Purrito’s favorite café in the area.

At least we bought cat food.

I haven’t taken (or posted) a good picture of a buoy in a while.

Look at those lines. 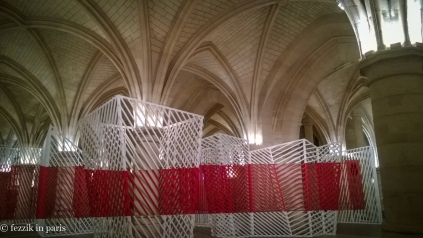 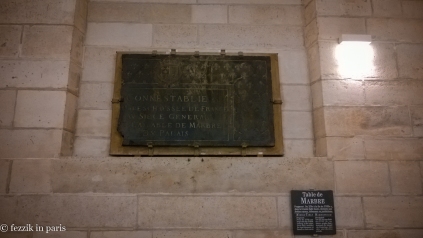 A chunk of the marble dining table that dates to the building’s palace days.

A mid-tier prison cell (upgrades available, for a price).

The conciergie was a palace from the tenth to the fourteenth century, and a prison thereafter. It gained particular notoriety as the last stop on the way to the guillotine during the Revolution. All of which is only tangentially relevant to this being the view from the women’s courtyard.

The inside of Notre-dam… zzZZzzzzz…

They had tapestries with turkeys and chickens on them, which was nice. 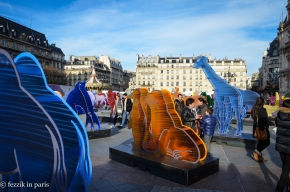 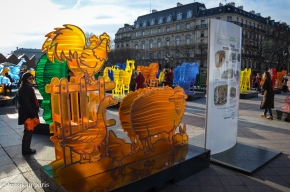 I believe that this is all connected to COP21 (lazily, I didn’t read the sign). It’s in the plaza outside of the Hôtel de ville.