Hopping off of the 13 at Invalides, an acrid smell hung in the air. At first I though it was a technical issue with the train, as the smell strongly resembled that of very hot metal (something I’ve inhaled my fair share of, due to periodically having been in close proximity to a welding or grinding station), but as I made my way towards the station exit (or the 8 that would take me closer to home), the thought leapt in to the back of my head: this is probably teargas.

Indeed, as I was in the corridor leading to the exit (so very close), a mob of RATP police came in the opposite direction, yelling at those of us in the hall to move back. Hearing a loud popping sound in the background, my suspicions were confirmed: shit, this is teargas. Hoping that it was simply a case of hooliganism gone awry (the 8 leads to the Euro2016 fanzone near us), I turned around and headed towards the long passage to the RER C, in hopes that this other exit would be clear.

I realize now that I should have hopped back on a train (any train) when the first exit I tried was blocked; I did not, and headed out the exit in time to notice a large crowd on the raised terrace near the Air France café, and watched dumbly as the group of strikers carrying CGT flags walked in my direction. It was at this point that I heard several loud pops, and the teargas canisters started coming down, blocking my way back in to the station.

So began an hour or so of attempting to stay ahead of the CGT crowd, feeling vaguely uncomfortable, and then moving just as gas was launched in the vicinity of where I had just been. I watched strikers squeeze past the (massive) police barricades and down along the Seine, mixing in with a group of hapless tourists, the entire lot of which were dispersed via three (very accurately) placed gas canisters. I heard the dreadlocked kid with the gas mask around his neck cheer and start applauding (provoking further applause from a similar crowd) as he yelled (in French, obviously) “Gas the touriusts.” I listened as an older California couple whined to one of the CGT organizers about how very inconvenient all of this was, and noted his wry smile as the woman kept asked only “Why? Why? Why?” I watched as a fat American waddled up to one of the police in lobster gear (the Purrito and I’s preferred term for the plastic plate that riot police here are equipped with), waved his passport at the cop, and then hurriedly waddled in the other direction when the cop indicated (via a not-exactly-subtle repositioning of his riot shield) that he would find no passage through the police line.

While I wound up punching a hole in the Amazon box that I was carrying around (said box containing a tub of K’nex that I ordered for work-related purposes) due to using it as a makeshift head protector (no sense in taking any chances with my head; French cops apparently fire teargas up into the air as opposed to at people’s chests, like I’ve seen cops do in news reports in the States), luck was finally with me, and I managed to get back to the exit that I had originally come out of just as the CGT (and thus the teargas) headed back in that direction.

After an unexpectedly long RER C ride (due to the next two stations being shut down due to the grève) and another métro ride to get me back to our quartier, and I was home, some nearly two hours later than intended.

This was the scene as I exited the station. Note the teargas cloud at the center left. 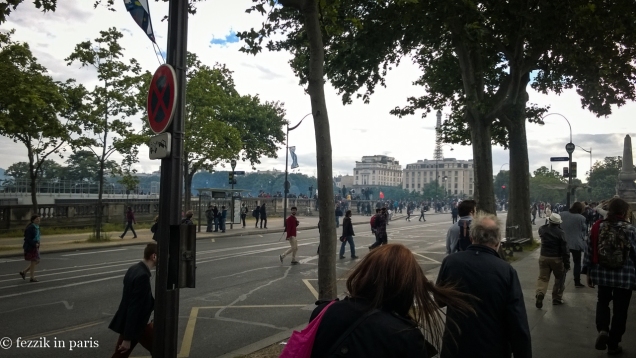 Having been stopped by the steel barricade, I thought that perhaps I could get down to the quay. 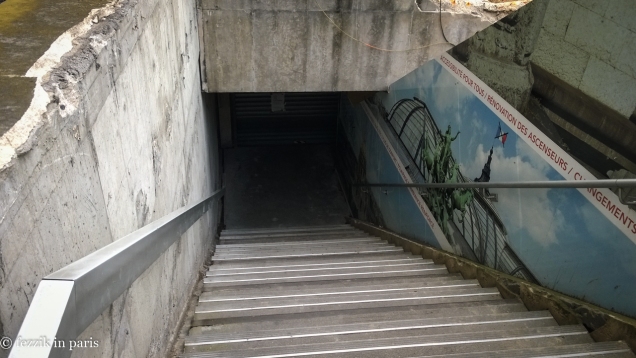 Fuck. Not getting back into the station via this entrance.