We spent Saturday at the Salon des vins des Vignerons Indépendants, which is to say that we spent the day wandering around the convention center at Porte de Versailles trying wine, grousing about how heavy the bottles we bought wound up being (our final haul of six bottles was over my shoulder at one point, until the Purrito removed two of them from the bag by force, so as to halt my progressing slouch), and munching somewhat disgustedly on pulled duck sandwiches (the food vendors were incredibly pork heavy; we were effectively confined to pulled duck or foie gras, and we’d had goose-torture-liver the night before, when we decided to pre-empt our Thanksgiving reservation for a meal at Café Constant).

It being the realm of independent vintners, the prices were surprisingly low, even for French standards; in addition to the restaurant orders that were being fulfilled, there were numerous people with the French shopping carts and dolly-like contraptions hauling around dozens of bottles of wine (you can actually buy said dollies at the convention for a very reasonable 29EUR, but we never quite stumbled upon a wine that impressed us to the point where we said “damn, let’s buy six bottles”).

Without further ado (or bloviation), the haul: 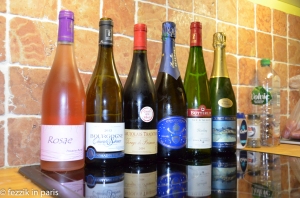 The beaujolais nouveau wasn’t actually from the show, and we bought two bottles of the champagne with the blue label.

Major lesson learned: bring a baguette next time, so as to clear the palate between tastings (observed population of baguettes sticking out of backpacks: too numerous to count).