I took the afternoon off yesterday, and after eating lunch (sudeois sandwiches from our favorite boulangerie, Nelly Julien) and taking delivery of our water shipment (Evian chez vous: preventing people from schlepping around cartons of water since whenever), we hopped what proved to be an asthmatic RER to the eastern terminus of the RER A, Marne-la-Vallée – Chessy, to begin our brief adventure in Disneyland Paris.

The Purrito (who is currently still asleep; no bagpiping pigeons here) and I have been half-seriously considering a trip to one of the Disney parks in the States for a while; the relatively close proximity of Disneyland Paris is such that we figured that hopping the train, staying at a hotel outside the park, and giving the place a whirl was a relatively low-cost (offseason prices, single day park tickets, no airfare to Florida or California from Texas) way to see if this whole Disney thing is really our bag.

I am happy to report that thus far we’ve seen both a massive green field (not a lot of those in Paris) and a National Lampoon-style (did I just make myself look old by mentioning that series of movies? It’s not as if I saw them in theatres…) entrance to hell. 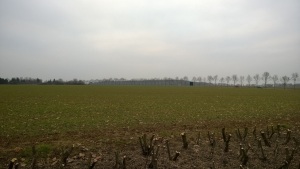 ….can you tell a green field from a cold steel rail? 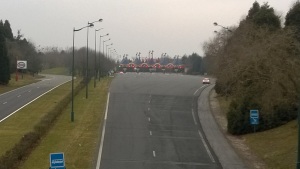 Dante would be trembling.

Other than that, it’s been fine, though we’re seeing the first signs of the infamous funding issues that make Disneyland Paris the rolling, nearly-closed-who-knows-how-many-times clusterfuck that it’s known to be. Still, we’re going in with open minds (maintain straight face, maintain straight face) and will undoubtedly come out with both loot and fond memories of something (Ratatouille ride, please don’t suck).

In any case, I’m off to other parts of the internet, to see if I can find more information on Disneyland Paris’ current scheme to reduce their current 1.7 billion EUR debt load to a supposedly more manageable 998 million EUR…