Our adventures in the colder parts of the European continent have taken us through Bruxelles thrice now; we’ve passed through twice on our way to Amsterdam and once on our way to Bruges. While the stops were always short (on the order of three or four minutes in the case of the Amsterdam trips, a whopping five or so for Bruges as the conductor had to go from the previous front of the train to the new front of the train), I always found myself looking at the window (the back of my head in the Purrito’s face; she’s an occupier of window seats, whereas I tend to get grumpy if not in an aisle seat) wondering to no one in particular as to what this or that building is and how interesting I imagined the business district to be (it’s the [undeclared] capital of the EU, which elevates this assumed level of interesting to pretty damn high).

I suppose that it is thus odd that, from a philosophical standpoint, I find myself wondering if we actually went to Brussels (I’m currently imagining the sigh that will escape the Purrito when she reads this, but onward, to glory…); we bought train tickets to Brussels. Our hotel was in Brussels (the Sainte-Catherine district, to be precise). We walked through the Grote Markt, saw the remnants of the medieval gate from the window of a bus, bought nominally Belgian chocolate (far, far too sweet), photographed Manneken Pis, and even ate at the Hard Rock Café Brussels (I wanted a new T-shirt to sleep in; so sue me). We did not, however, enter the medieval gate, descend into the subterranean museum under the city center, run around mini-Europe, subject ourselves to the extortion that apparently defines a visit to Atomium, or walk through the gleaming business district to sate my curiosity regarding whether The International (criminally underrated) was actually filmed in Brussels (yes, I am aware of the existence of IMDB).

Indeed, our Brussels visit was not really to the city itself, but rather to a hill.

The hill in question is by no means normal; it’s 40-odd meters high (225 steps up) and has an approximately 25-tonne, 5-meter-high lion standing on top of it. It’s 4km from the Wellington Museum at the center of Waterloo, which is itself approximately 15 kilometers south of Brussels. The mound is also much further away from Gare de Braine-l’Alleud than the nice lady at the tourist office told us it was, so while we muttered under our breaths about the unexpected 3km hike to a train back to Brussels (which, funny story, we didn’t end up taking, since the bus line that had taken us to Waterloo terminated at that very train station), we don’t hold any lasting resentment because she let the Purrito pull a fresh plush lion (wearing a Waterloo tee shirt) from the as-yet-unpacked box that he and his clones were shipped in. The Purrito’s fitbit overlord was also assuaged by the surprise hike, so there was a secondary benefit.

I liked the hill, dug the lion, completely forgot about the Wellington museum approximately 30 seconds after we exited, and had my dislike of buses reaffirmed (they’re my transportation nemeses at this point).

All in all, it was a fun trip, albeit one where nothing was quite what we expected it to be. Alas, our journey to Brussels just had effectively nothing to do with Brussels. 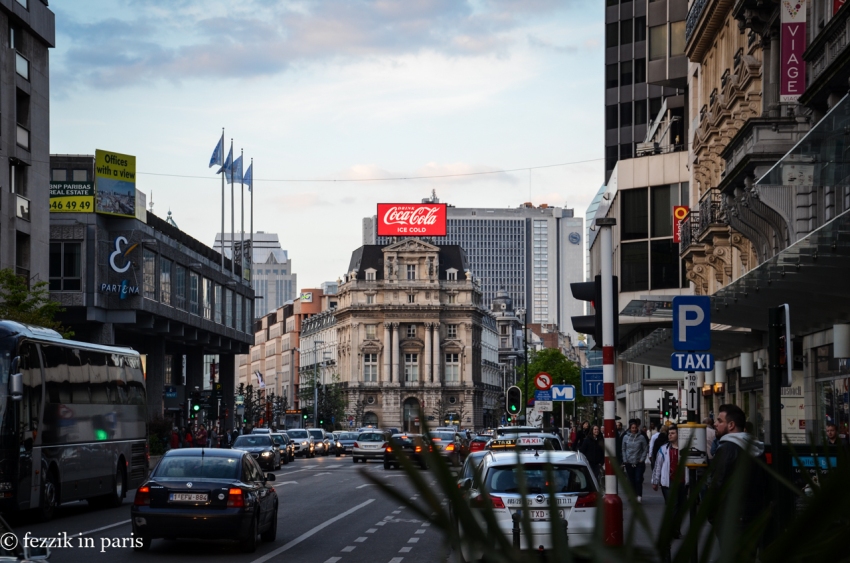 Brussels felt like a very strange mix of France, the Netherlands, and the States; Dutch architecture, French cafés and shops, but with a huge dose of car culture (their métro system seems to suck, to be blunt), shameless advertising, and unappealing food (seriously; it was like Rodeo food but in café settings). Also, this particularly classy advertisement. 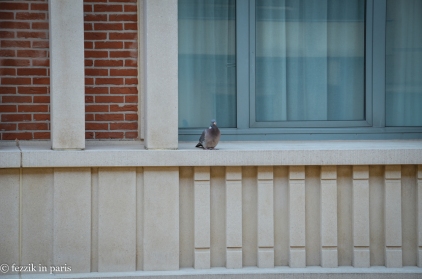 Pigeons here tended towards the very large end of the spectrum. 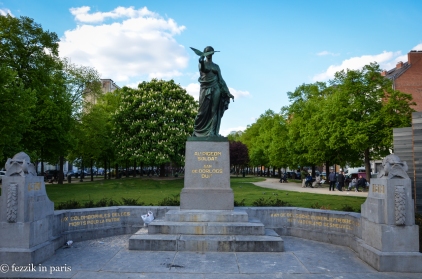 An interesting discovery in the vicinity of our hotel: a memorial to pigeon courier troops of the first world war. 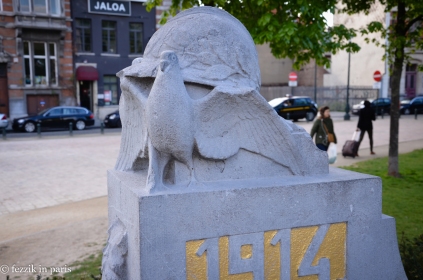 Detail of the helmet and pigeon. 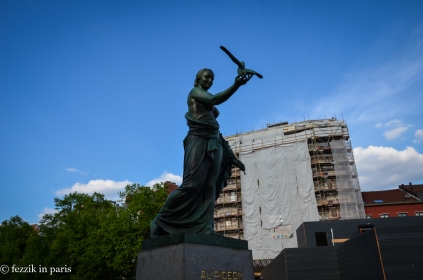 A closer look at the buxom statue. 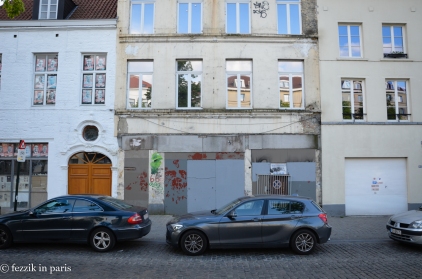 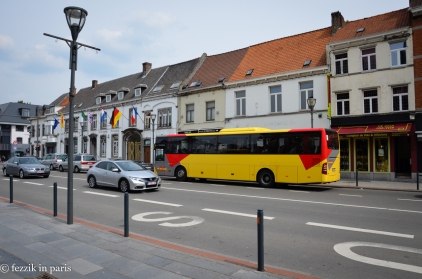 This bus is very yellow. 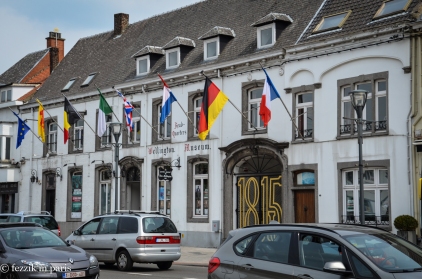 The temporary exhibition was actually well worth our time. 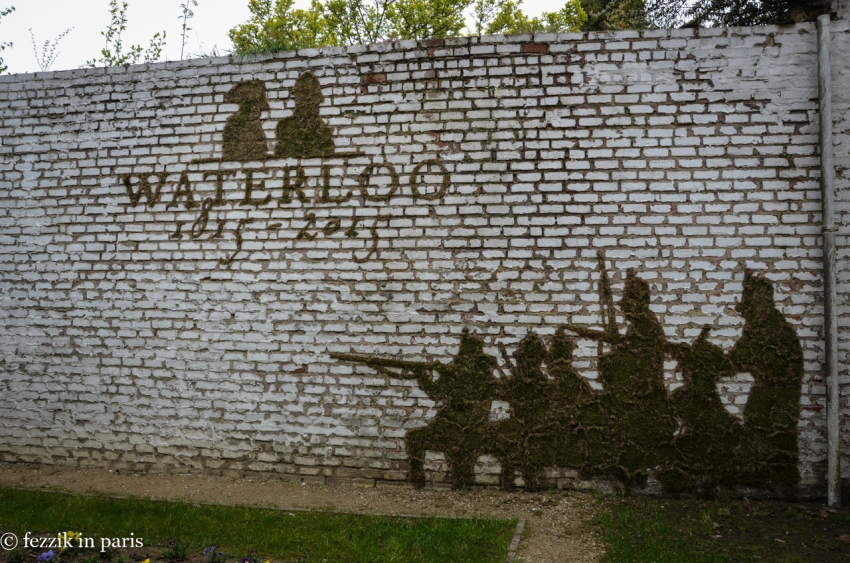 Arguably the most interesting thing associated with the Wellington Museum (great gift shop…if only we had realized that the one at the lion would be so bad). 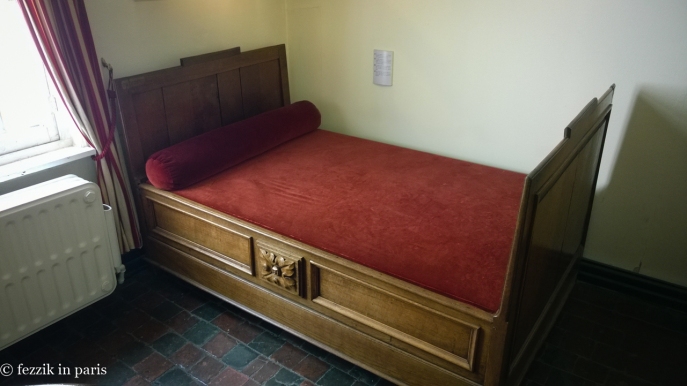 Arguably the second most interesting thing in the Wellington Museum. 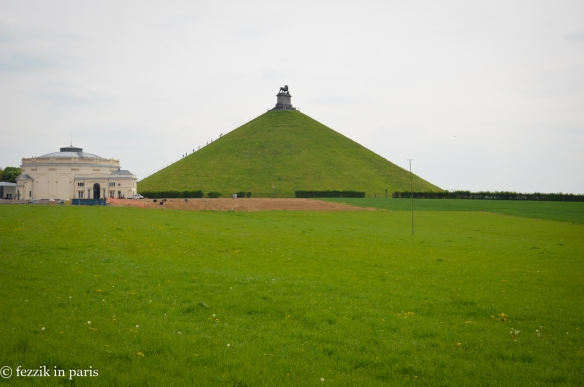 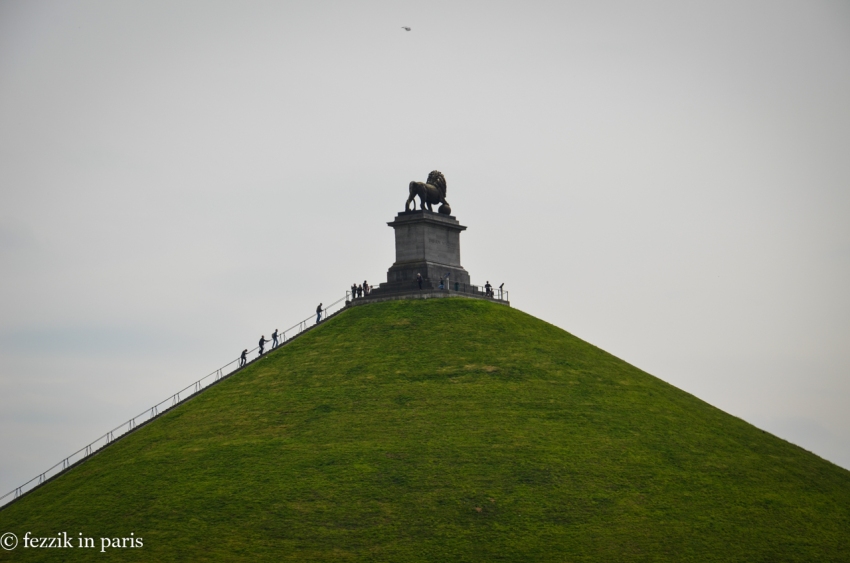 This thing is hard to photograph. 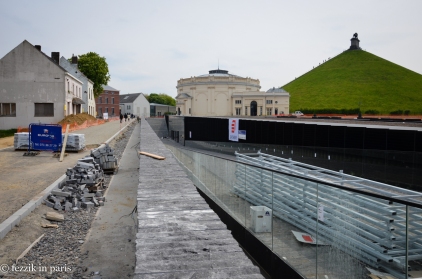 This is supposed to be finished in time for the 200 year fête that’s taking place between the 18th and 21st of June. I wonder what the delayed completion fees are when you manage to ruin something’s bicentennial. 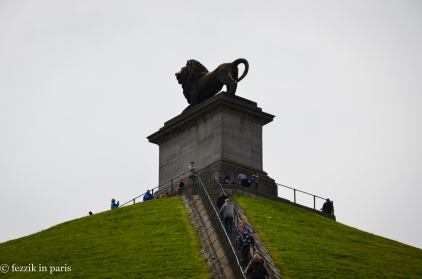 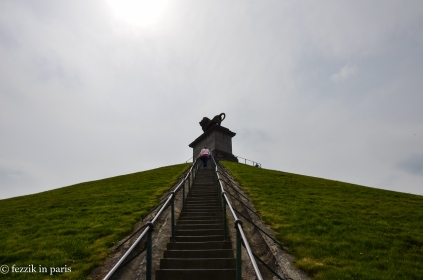 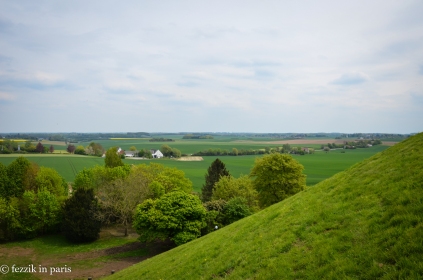 The view from approximately the halfway point. 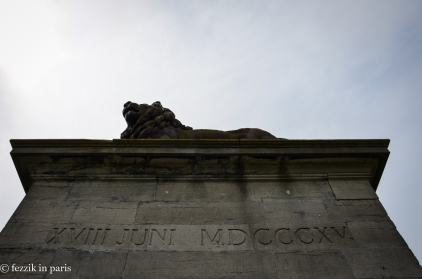 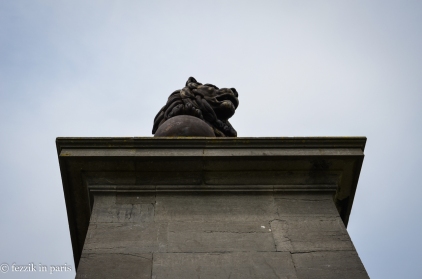 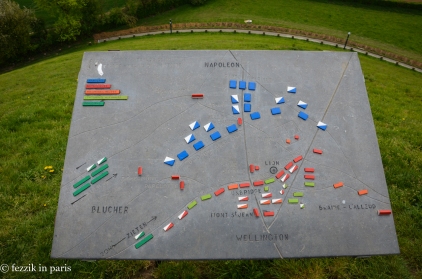 Looking down the side of the hill. 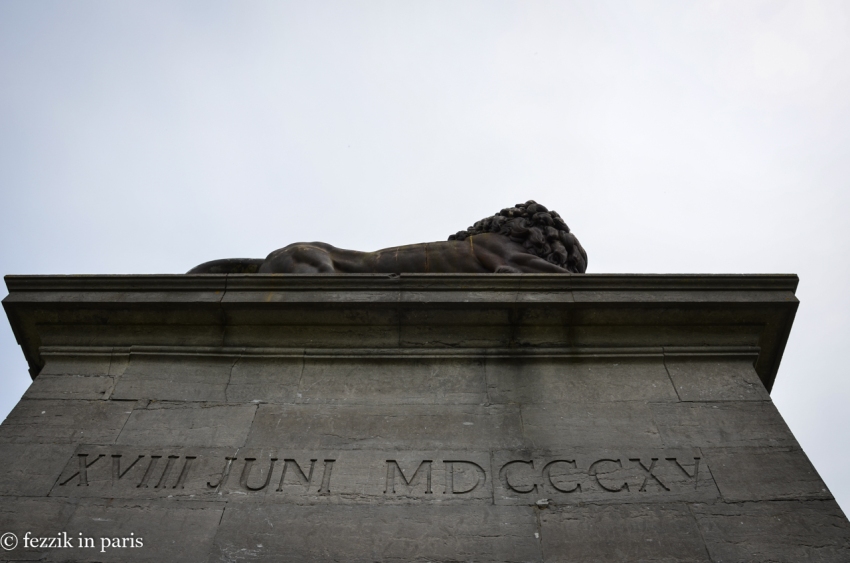 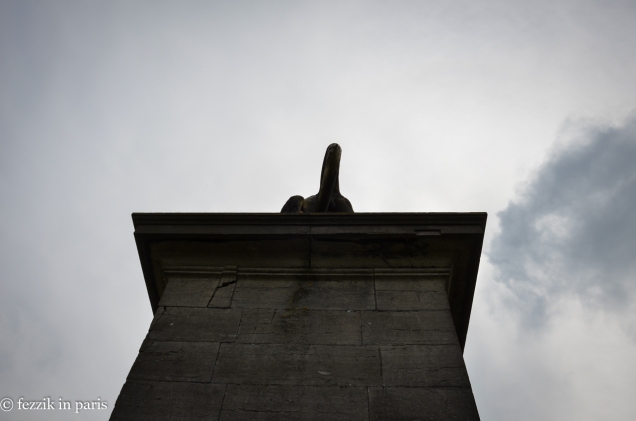 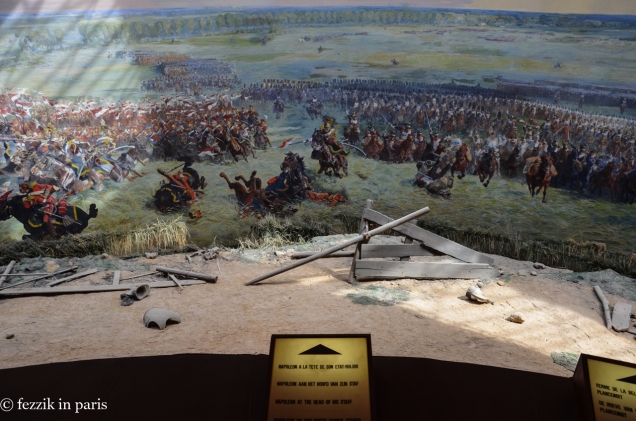 A 3.5 meter tall panorama (housed by the cylindrical building seen in the establishing shots). I loathed this thing on a visceral level, but have no idea as to why. 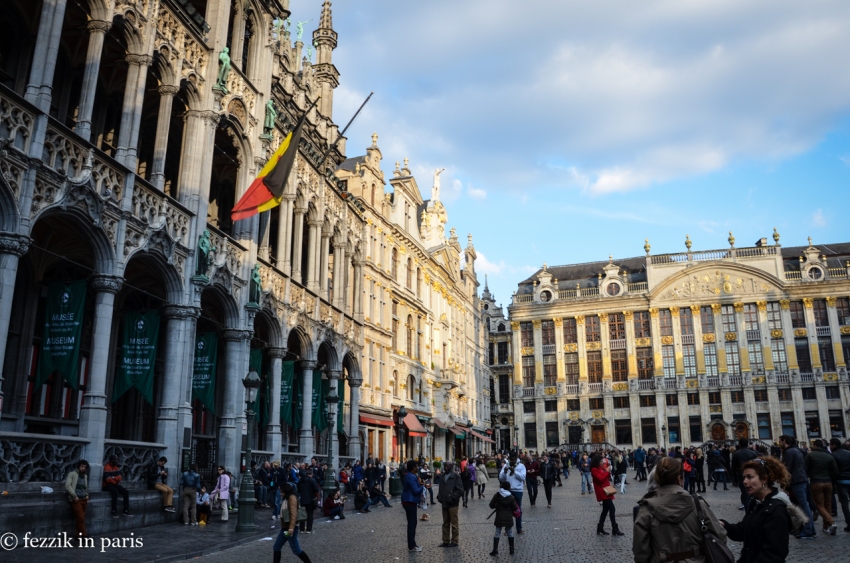 A shot of the main square. (we’re back in Brussels with this photograph). 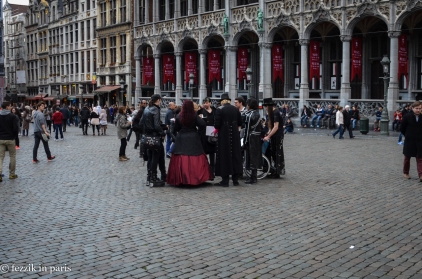 Brussels was somewhat like Amsterdam in that there were roving bands of bachelor party (and one bachelorette party) revelers. I didn’t get a glance at the signs that this group was wielding, but I assume that they were celebrating the appearance of a Hot Topic. 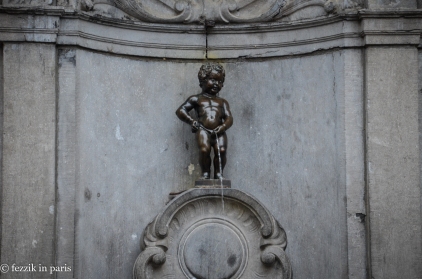 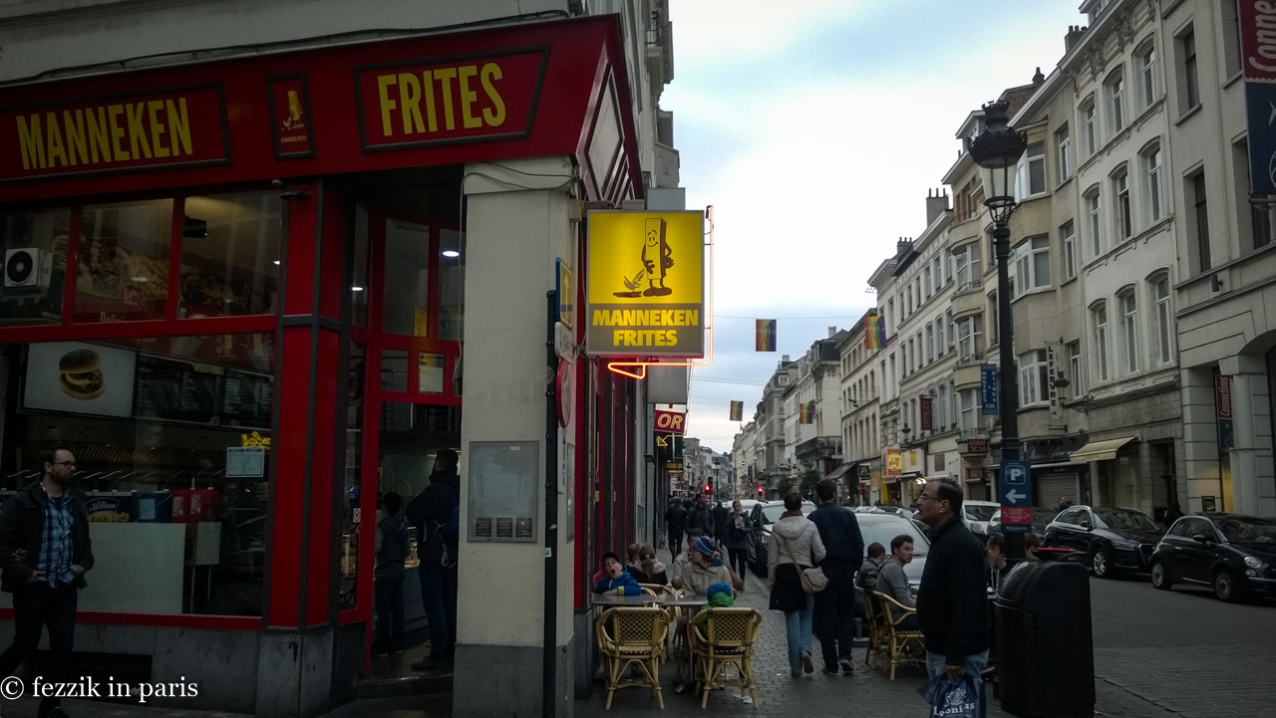 As one would expect of a nearly 400-year-old joke, there were numerous imitators. This one was my favorite.