As I watch the last of le tour de france in another windown (thank you, Orange TV), my thoughts turn to how cold and wet my feet currently are. While the weather for last year’s finale was further along the trés chaud axis, the weather this year was damn near cold. And wet. So very wet. On the positive side, though, the route through Paris took the tour down one of the main streets in our area; meaning I had to walk all of seven or so minutes to get to the corner on which I wanted to stand. With the rain came lousy light, so there’s a lot of blurriness; still, not a bad batch of photographs.

As I said, it rained. 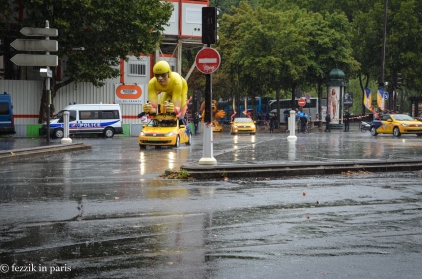 Year two of not being able to find one of those damn plush lions. They used to sell them. The internet told me that it was so. 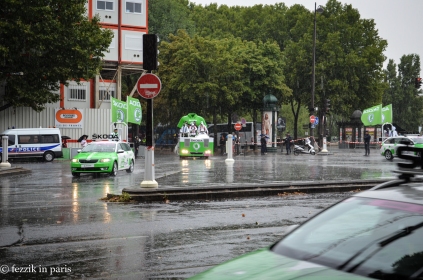 It’s not a party until Skoda rolls up.

The gendarmes are recruiting.

The Haribo trucks are designed by lunatics.

This shot is for the Purrito.

God I love the sponsor caravan.

Lots of body roll on these 2CVs.

Rolex or Omega these guys are not.

…an hour and a half later: it’s time to get excited.

Best picture of the set.

Best picture of Chris Froome. Sigh. Did I mention that the light was bad? 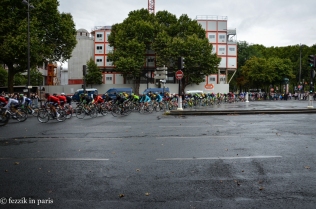 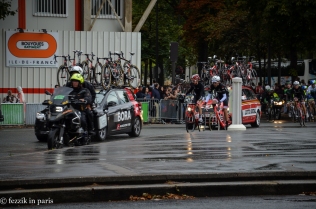 Cars carrying bikes; we’re coming up on the end.

Ok, everybody out. The paramedics just drove by.