Tomorrow evening we will be returning to Amsterdam (yes, that is trip number three) for SAIL 2015, which seemed like a perfect excuse to pick up the zoom lens that I’ve had my eye on. Sadly, FNAC doesn’t stock the lenses; as I managed to keep putting off going to the store and asking the photo person to order one for me, I found myself running out of time. Enter amazon.fr, which was cheaper and didn’t require bumbling through acquiring the correct lens in French.

The lens arrived yesterday, the box festooned with Polish stickers (they direct you to Nikon.pl) and sealed with a piece of tape stating that said lens is not to be sold separately.

I double-checked the site to see if this was my error, but it wasn’t; the lens is supposed to be new, and is an amazon item and not that of a third party seller.

Thus it would appear that amazon.fr is opening Polish-market Nikon body-and-lens kits and selling their contents separately in another country. Which sounds sleazy to me, and that’s even before I wonder aloud about the quality gap between a kit lens and a made-to-be-sold-independently lens.

As evidenced by the pictures that plague this site, I’m just an asshole with a camera, not a photographer; I’ll thus be keeping the lens, the chunk of change that I probably did not actually “save,” and the vaguely disgusted feeling the situation has evinced. 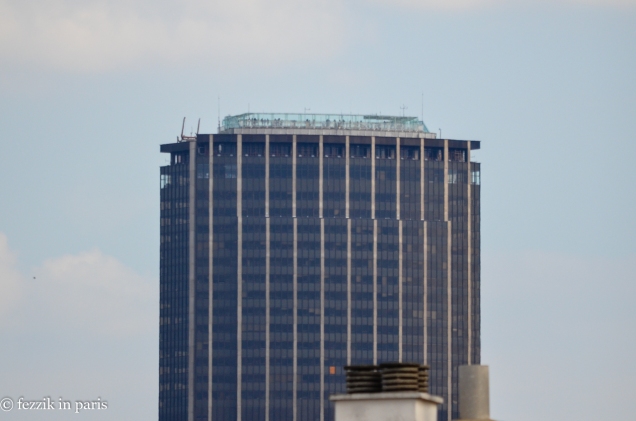 Tour Montparnasse, as seen from our balcony.

Fortunately, it does zoom.