While reading a post on the Expatriates in Paris Facebook group a couple of months ago, I engaged in a fit of poor judgement; seeing a banner ad proclaiming that Oktoberfest was, finally, coming to Paris, I clicked, noticed that tickets seemed to be rapidly selling out, said “what the hell,” and paid for two seats near the stage. I then texted the Purrito with “by the way, we’re going to Oktoberfest in October” and that was the end of the story, at least at that point in time.

When Saturday rolled around, the outlook on this particular plan became less certain; not only was the venue not what I had originally thought it to be (I had thought it was at the ever-familiar Porte-de-Versailles, whereas it was actually at the Paris Event Center, the new venue was out in the 19th arrondissement, otherwise known as one of the zones urbaines sensibles, or shithole-where-cars-may-or-may-not-be-periodically-burnt).

And we’d be going at night, presumably drinking, and then coming back.

Our journey out to Porte de la Villete was mercifully uneventful, with the exception of a too-full métro and the weirdly clingy couple that we thought might have just been strange or drunk until they both cooed as the woman flashed the heroin cooking kit that was lurking in her bag.

We found ourselves among small groups of frat-looking types sporting lederhosen and the alpine hats (the name escapes me at the moment), and we were more than a little surprised when we actually walked around the convention center and to an admittedly very large (if a bit sad-looking) tent that was to be the place of revelry.

The beer was good (Paulaner Oktoberfest, which apparently tastes even better when it hasn’t been thrown in a container, sent across the ocean, stuck in a warehouse, and then put on trucks for delivery to one’s local grocer), the pretzels were a) huge and b) strangely tasty (it was a pretzel: since when do those taste so damn good?), but the music was LOUD (one expects an oompah band, but not a fully miced ten-piece kinda-rock-band) and we were less sure about the rest of the food (meat, potatoes, beer, repeat), so we quaffed our brews, laughed at the overly emotional reaction to a badly-sung version of Que sera, sera, and then hoofed it the hell back to our ‘hood, where Asian food and a cheap-but-really-good (thanks, guy at Nicolas that I loathe talking to) bottle of champagne were procured.

And that, kids, is why Saturdays are reserved for large meals and booze at home. 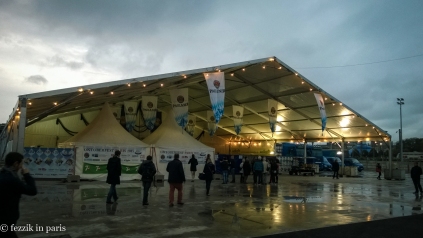