It would be reasonable to argue that Saturday’s expedition was perhaps not our finest weekend, but while it fell short of the good idea mark, it did not fall so short as to earn the classification of “dumb idea of the week.”

Our primary foe was the weather; the past few days have brought with them a rather harsh cold snap, and the temperature on Saturday, even given our noon hour late start, was only in the mid- single-digits (Centigrade, obviously). As we left the apartment, we both noted that while it was colder than expected, the weather was still bearable; further, we regarded ourselves as prepared since we had each brought an umbrella.

Having ridden the RER from Pont de l’Alma to Gare d’Austerlitz, we found ourselves along the banks of the Seine (near the Charles de Gaulle bridge), amidst a noticeable breeze and a touch of rain; while somewhat annoying, I managed to take random pictures of stupid shit, and we continued to our destination, Art Ludiqe – Le Musée. There, we were searched twice (once in the atrium, and again just before the ticket desk) before buying our tickets to L’art dans le jeux vidéo.

The exhibit was a serious treatment of video game art (with walls of concept art, backgrounds, and “digital paintings”) from francophone video game companies. While this led to some surprises (I didn’t realize that Quantic Dream and Arkane were francophone studios), I also got most of what I was interested in, which was walls and walls of art from Ubisoft, the lion’s share of which came from the Assassin’s Creed series (though Rayman and the associated rabbids were well-represented as well). Our tour complete (and well-timed, based on the crowd at the previously-empty entrance), we emerged to find that the weather had turned to absolute and complete shit.

Fighting the wind, rickety umbrellas, and near-horizontal rain, we managed to make it back into the gare. At this point, we made the first in a series of dumb decisions; instead of going home, we decided to continue as per the original plan to the grands magasins, in pursuit of what I don’t even remember (I lied; champagne, food…and a hat for the purrito?). After bungling my way through what should have been an idiot-proof conversation with a gendarme blocking the entrance to one of the métros, we hopped on the RATP-app-suggested line, only to find that our expected travel time was in the ridiculous duration range. Fortunately, the Purrito knows the area, so we altered our route in favor of an arrival in significantly less time.

Our time in the grands magasins is a touch hazy; between the crowd, the security (the new world in which we live: one has to open ones coat to prove that there’s not a suicide vest, since those were the hot new thing in the recent attacks) and the rising hunger level, there’s not much that strikes me as noteworthy; I will note that their upper-floor mini-Disney-store was a source of amusement (from which we somehow managed to exeunt without a stuffed animal), and that I tend to be more helpful in the “what do you want to eat?” department when we’re in the store and I’m hungry (in my defense, those cans of foie will eventually get eaten… we just have to go back for more toast so I have something on which to put it). That, and half of Galeries Lafayette’s (in)famous holiday display windows were filled with Star Wars (the other half with some amusing robots).

I know there’s another movie coming out, but it’s Star Wars. Doesn’t anybody remember May 1999? 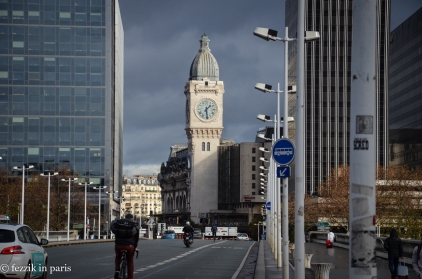 The clock tower from a gare whose name I’m entirely too lazy to look up at this particular moment in time. 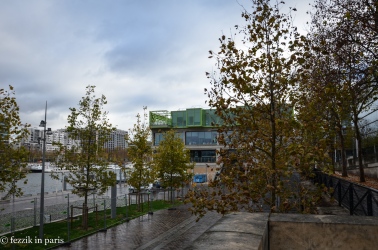 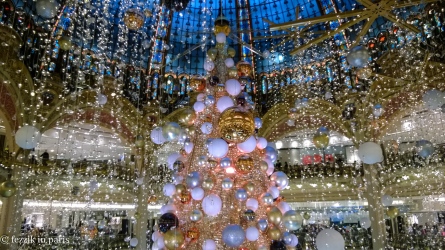 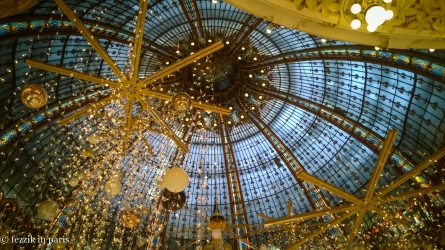 Robot wolves and the street behind us.