The Basilique de Saint-Denis is a strange place. Originally a shrine built over the site to which Saint-Denis, a patron saint of Paris, supposedly carried his head after a 10-kilometer hike from his place of execution atop Montmartre, the site would eventually become, with some coaxing by Saint-Louis, the French royal necropolis, with nearly every ruler from the 10th century (I can now say that I’ve seen the gisant [effigy tomb] of Charles the Hammer) onward buried there.

The supposed burial place of Saint-Denis. (Supposed due to the lack of any human corpses)

Robespierre, in a fit of Terror-fuelled revolutionary fervor (or perhaps, more prosaically, simple grave-pissing), ordered that the tombs be cracked open and the corpses thrown in pits with quicklime. The bones, completely unidentifiable and unsortable, would be placed en masse in an ossuary during the Restoration, while Louis XVI’s and Marie-Antoinette’s bones would be plucked from Madeleine cemetery and re-interred in the new “Bourbon Crypt.”

The inhabitants of the ossuary (removed from their quicklime pits during the restoration).

The Bourbon crypt, which contains  the re-interred remains of Louis XVI and Marie-Antoinette. 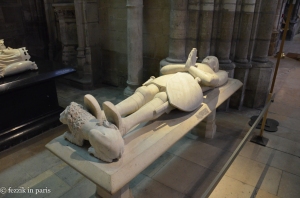 The sculpture from one of the many (empty) gisants. 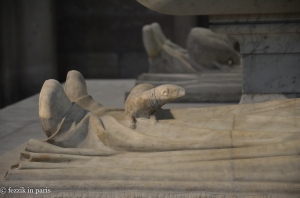 A fair number of the effigies have dogs or lions at their feet (in at least one case, the animal was snuggled up to the feet, as opposed to being stood upon). This ferret seems to have turned the tables, though.

One of the more elaborate tombs. 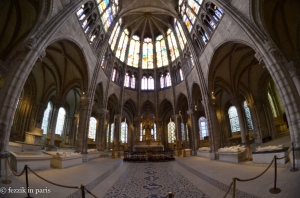 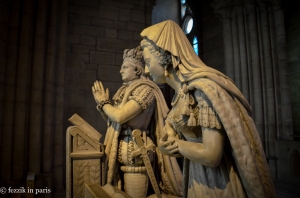 Marie-Antoinette and Louis XVI (commissioned during the restoration by Louis XVIII).

The heart of the 10-year-old dauphin, who was intentionally neglected to death. Secretly preserved by the physician that performed the autopsy, the heart was guarded by various royal families and finally DNA tested and interred in 2004.

Today, what is regarded as the first example of gothic architecture sits in the town of Saint-Denis, a northern suburb of Paris. Saint-Denis the banlieue (technically just a word for suburb, but now tinged with the negative connotation implying high concentrations of low-income housing projects) is a complete shithole, with various people I’ve talked to having expressed surprise that we’d be so bold as to venture up there, and even my French tutor having said that she’d avoid anywhere other than the cathedral itself.

The front of the basilica, which is currently undergoing restoration. The city of Saint-Denis is supposedly attempting to secure financing for the reconstruction of the tower that was removed from the left side of the building during the 19th century (the original stones are actually stored on-site). 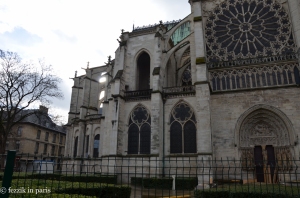 Exterior shot. Several sources note that this is the first Gothic building.

Fleurs-de-lis on the exterior façade.

There is a parallel (and a dichotomy) with Versailles here, but I’m still mulling it over, still unable to verbally articulate my thoughts on the entangled mess.

A shot of the lovely apartment buildings that surround the basilica.

I wonder if Robespierre would be proud.

One thought on “picture dump: saint-denis”