Mawwiage is what [bwought] us here together today.

Such was my excuse for standing in line at Shakespeare and Company last night, though I may have phrased it somewhat differently:

Me: Huh? (I had been scanning the crowd in an attempt to determine the source of the wine glasses that many people had in hand)

RW: What’s going on? Why are you standing in line?

Me: Oh, uh. I don’t know. You’d have to ask my wife. (Cue pointing at the Purrito, who was coming to reclaim her place in line, having asked me to hold her spot as she tried to ascertain how fast said line was likely to move).

I had already resumed my hunt for the wine source as the Purrito explained the situation to the woman (a book signing [of which I knew] for a book about which I had never previously heard [Lauren Elkin’s Flâneuse]).

Epilogue: the Purrito’s book was signed, the author seemed thrilled to be there, and I came away with a book on Fouquet in recompense for the line standing and unsuccessful hunt for booze. The rat that was perilously close to my foot (I also walked around “rat park” as the Purrito stood in line) was also avoided at the last moment (sorry about the close call, Master Splinter), so I’d be inclined to call it a pretty good evening. 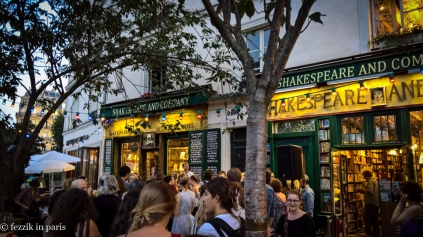 It’s a rodent of (not so) unusual size.

The streak in the center is a rat mid-stride. There’s also one on the step, below the branch.