Header images, which are the spiritual successors to posters, work as well.

I fully admit that our trip to the petit palais was prompted entirely by a header image that I saw while skimming through a blog that I read. I acknowledge that I had been psychologically primed by the title, “Les 5 expositions incontournables de la rentrée,” but their header image for L’art du pastel de Degas à Redon, which was a photo of one of the paintings featured in the exhibit, resulted in said exhibit being placed in the floating section of The Calendar. It was at the floating category that my gaze was cast after the Purrito asked me what I wanted to do on my (unscheduled; the joy of having to burn PTO lest one lose it) day off.

It was thus to the petit palais that we marched on Friday, somewhat surprised by the cool but sunny weather that was supposed to have been torrential rain (our rule of thumb regarding Paris weather is that if there is any chance whatsoever of rain, it’s going to rain). It was in the palace, being configured a bit differently due to an ongoing internal renovation, that I saw the poster for the second exhibit, a retrospective of the Swedish artist Anders Zorn), and asked the Purrito if she had any interest. She glanced at the poster, said yes, and we purchased combination tickets (a new addition to the petit palais).

As it turned out, Zorn was better than pastels, but both were enjoyable; a happy surprise. 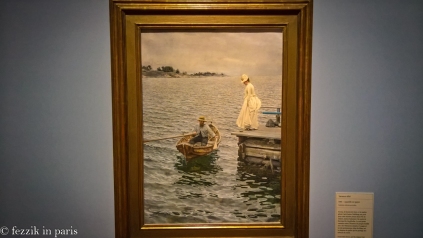 This painting was used for the Anders Zorn poster. That’s watercolor.

Per the Purrito, this is me in approximately 35 years. I can live with this.

The palais has some nice ceilings.

OK, the pastels exhibit is starting off well enough. 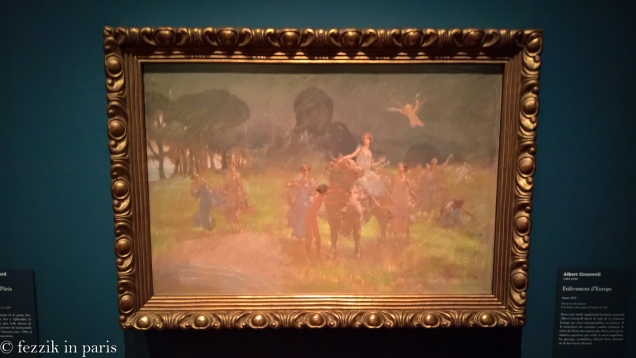 The painting (used as a header) that caught my attention.

From the permanent collection in the petit palais.

There’s a distinct lack of champagne, but this otherwise appears to be a respectable party.

Just outside the palais: fat pigeons!

I had not previously realized that this was a statue of the Marquis de Lafayette.